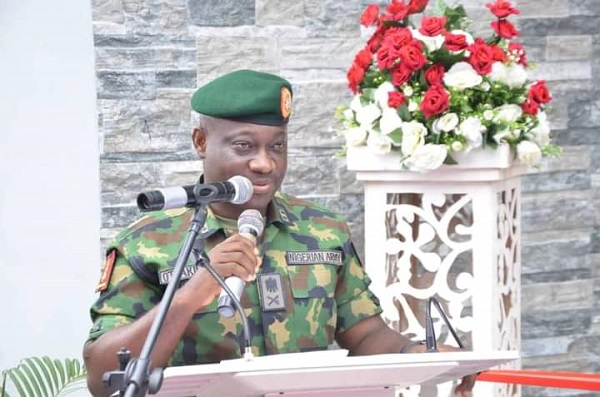 In a statement made available to journalists by the Director of Army Public Relations, Brigadier General, Onyema Nwachukwu.The COAS, in his remarks at the commissioning ceremony, said the Nigerian Army under his watch will continue to give back to the society in recognition of the cooperation and support enjoyed from them towards actualizing its constitutional mandate. He urged them to sustain the peace and harmony he witnessed in the community for the progress and development of Oyo state and the nation at large, adding, that the edifice should be utilized for the collective good of the community.

Gen Yahaya also seized the opportunity to commend the loyalty of officers and soldiers of the Nigerian Army for their service and sacrifices in defending the nation, charging them to remain committed in the ongoing fight against security challenges in the country.

In his welcome address, the project executor, who is the Chief of Operations (Army), Major General Olufemi Akinjobi, an indigene of Akinmoorin community, stated that the successful completion and commissioning of the project is a remarkable landmark in Akinmoorin Kingdom. He noted that the project is part of the COAS’ special intervention project and the dream of the community, which had remained elusive for thirty-two years. Gen Akinjobi appreciated the COAS for the honour done to the Kingdom by approving and personally commissioning the project. He assured of the community’s support in the realization of the COAS’ vision, progress, peace, and development of the country.