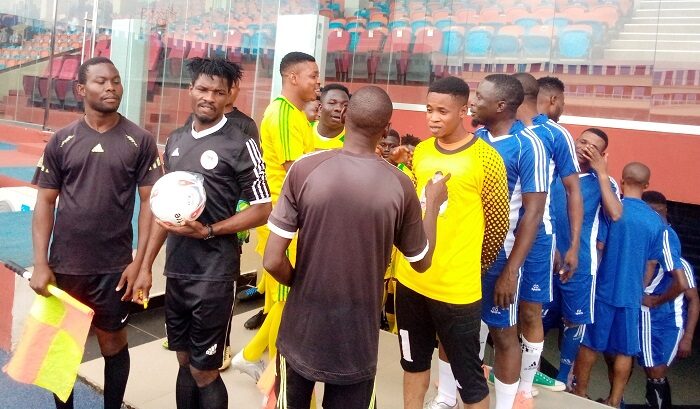 It was thrilling and fun inside the main bowl of Lekan Salami on Thursday when the Football team of Fresh FM 105.9 confronted Instagram Power Ministry (IPM) Football team in a friendly football match marking 20 years anniversary of a comedian and Gospel artiste, Ayo Ajewole popularly known as ‘Woli Agba’.

The Commissioner for Youths and Sports, in Oyo State, Asiwaju Seun Fakorede who was a special guest of honour at the event featured both teams and eventually scored a goal each for the two sides in a dramatic game that ended four goals to two in favour of the comedians.

Ayo Ajewole, the convener opened the scoring for his team with a superb turning, in-between the two defenders of the Ayefele boys before firing a thunderous shot that beat the goalkeeper hands down to record the first goal in the 18th minute of the game, after he doubled the score line with a penalty kicks few minutes to the end of the first half.

Fakorede in his remarks after the match thumped up the gospel comedian for his resilience that prepared him to made headway in the comic industry, while congratulating him for the two decades attainments, urging other youths to emulate him by taking time to discover and nurture their innate talents.

“Our Governor here has created very conducive and enabled environment for youths succeed in whatever positive thing they laid their hands on. Woli Agba and many others here are evidence that Oyo State is favorably suitable for youth’s talent development”, said the Commissioner