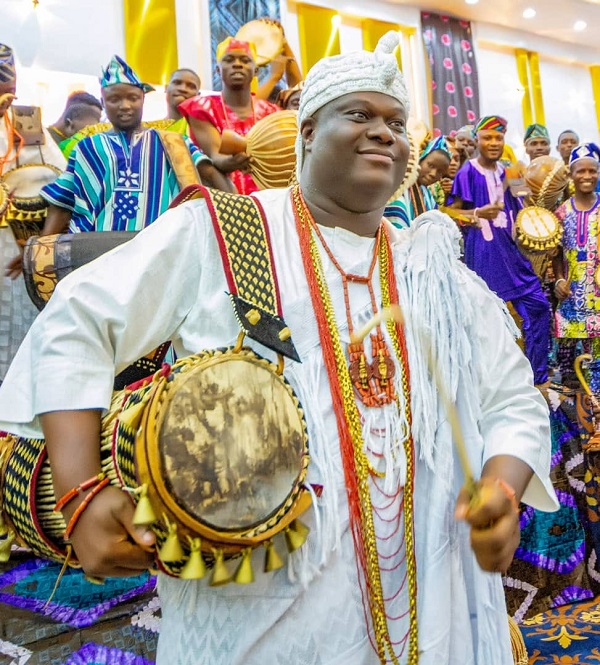 Ooni of Ife.
Arole Oduduwa Olofin Adimula, Ooni Adeyeye Enitan Ogunwusi, Ojaja II, the Ooni of Ife yesterday at Ile-Ife displayed his unknown talent as a drummer when he dazzled the teaming participants at the closing session of the annual Ayangalu Drum Festival during which he took up the symbolic African talking drum called ‘IYA ILU’ which he beat for peace and tranquility in Nigeria, especially during this electioneering period in the country.
In a statement made available to journalists through Director, Media & Public Affairs, Otunba Moses Olafare, It was noted that while narrating that the talking aspect of drumming originally came from animals, the African foremost monarch who at the closing ceremony held at the OJAJA ARENA inside Ife Grand Resort along Ibadan road Ile-Ife described drum as a vital tool for communicating peaceful coexistence globally had earlier during the flag-off ceremony of the festival, held on Wednesday, at his Ile-Oodua Palace, in Ile-Ife said the Oduduwa race was the first tribe to beat the drum in the whole world, saying the festival has to do with the rhythm of the drum which has to do with the connection of the spiritual connotations.
“Globally, people usually called our ancestors animists, because they had a strong relationship with them. “The Ayan Agalu festival has been in existence from a time memorial as one of the deities. No matter the tribe, either black, white, or brown, the world cannot do without the drum. The whole world has done a lot in the rhythm of drums as it is concerned. 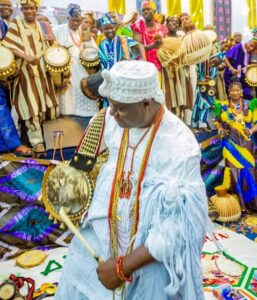 “Basically, We are just remembering our ancestors and giving them the honour that it’s due to them, I urge the Oodua race worldwide, Yorubas in particular to jointly continue celebrating Ayan Agalu so as to let the whole world know that the drum originated from us.” Ooni expressed.
According to him, Ayangalu descended next to Oduduwa place called Atiba in Ile-Ife from where Oranmiyan moved to found Oyo Kingdom stating that Atiba has since remained the hub of traditional drummers in Ile-Ife till date. Oba Ogunwusi who is the natural head of Oduduwa race also emphasized roles played by Orunmila in the drumming communication being the deity that first decoded the meaning of the drum and things that had to do with it.
“Our ancestors used drum majorly for communication, for it goes beyond entertainment and till date Yoruba people use drum for communication and as a vital tool for preaching peace and harmony..”By the spirit of Ayangalu festival, we use the rhythm and tone to communicate peace and peaceful coexistence to our people.
“We are like the barometer in the next electioneering campaign in Nigeria, Osun gubernatorial election is coming up in the next two to three weeks and that will lead to major election in Nigeria by next year January.” Oba Ogunwusi stated.
.
“We know that things are hard especially in the issue of security in Nigeria, celebrating Ayangalu will make us focus on peace and peaceful coexistence. Let’s remain steadfast in promoting our cultural heritage for our collective progress.” Ooni opined.
Also, the Ayangalu Ambassador, who doubles as Chief Executive Officer (CEO), Adire Oodua Hub, Princess Ronke Ademiluyi, commended Ooni for celebrating our female deities and other heroines such as Moremi, Olokun, Osun, Osara and Ayan-Agalu among others.
Ademiluyi said that Ayan-Agalu was a patron deity of drumming who deserves to be celebrated. She also lauded Ooni for championing gender equality by letting the whole world know that Ayan-Agalu was a female deity.
Stressing that over 200 children would be trained during a planned workshop on how to make drums and how to become a drummer with a view to sustaining the traditional drumming culture of Ayan-Agalu.
Ms Ayoola Ibukun Bisola, popularly known as Bisola Omoge Bata who is the Face Of Ayan-Agalu Festival 2022 expressed her gratitude to the Ooni for making her Face of the Festival and enjoined Nigerians to show interest in showcasing the African drumming to the world.
“Let me start by thanking my father, the Ooni of Ife to have found me worthy as the Face of this Ayan-Agalu Festival 2022. I also thank our team leader and ambassador, Princess Ronke Ademiluyi for her leadership, May I enjoin our people in Nigeria and Africa to show interest in this African drumming brand so that the legacy of our ancestors is well sustained. Omoge Bata said.
The Ogbomoso, Oyo State born Award-winning Nigeria’s first female “Bata” drummer maintained that Ayan-Agalu festival essentially celebrates of a uniquely significant communicative aspect of the Yoruba culture as manifested in the use of proverbs which are associated with the sounds of the drums in their various forms and components.
Equally, the foremost female talking drummer in Africa, Aralola Olamuyiwa popularly known as ARA who was appointed 6 years ago Cultural Ambassador to the Ooni described African Drums as inherent importance of communication which valued by the indigenous African peoples saying that every sound produced by the drum is a form of art and beauty that motivates happiness lasting excitement of the Africans. 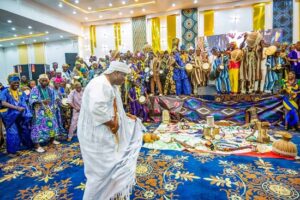 “Ayan is popularly described as the drumming spirit. Anywhere the drum is sound, it will be appropriate to assume that the Orisa of Drum and Music Ayan is around to give us happiness and lasting excitement.” Ara said.
Ayan-Agalu is one of the cultural festivals annually held in the ancient city of Ile-Ife, the cradle and spiritual headquarters of the Oduduwa race in celebration of the uniqueness and craftsmanship of Ayan Agalu, the deity of associated with drums, sounds and celebrations.
This just concluded 2-day edition kicked off on Wednesday 29th and ended on Thursday 30th June 2022 with over 200 drummers and drumm performing groups out of which best 48 groups were screened for competition which led to 6 outstanding winners; Ogunjimi Cultural Group from Osogbo came first and got a million Naira(#1m) prize.
Ayangbayi Bata came 2nd and got N500,000, while Esin Oye Cultural group from Ile-Ife came 3rd with N250,000 cash prize.
Itesiwaju Entertaining Group from Lagos exhibited a beautiful performance adjudged by the cheering audience to have won the competition but failed due to their choice of western dress to the cultural event. They however got the Ooni Ogunwusi consolation prize of N250,000, while Onilu Kishi Drummer Group from Oyo and Ayangbayi Cultural Group emerged Best Entertainers and Best dressed respectively with #150,000 each. In addition to the prizes won, all other participants were rewarded with cash prize of #40,000 each.
Tags : Ayangalu Drum FestivalOoni of Ife
previous article 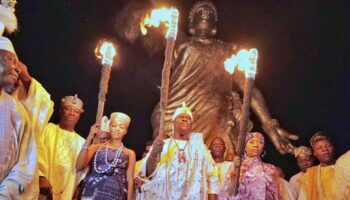