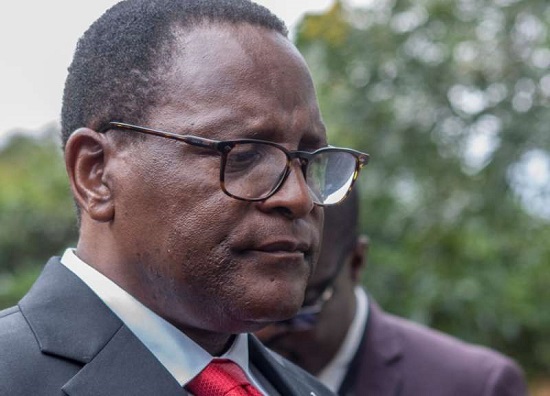 (FILES) In this file photo taken on February 03, 2020 Malawi Congress Party (MCP) President Lazarus Chakwera (L), who is the 2nd petitioner in the Malawi Elecions Case, waits to be screened by security at the Lilongwe High Court, where constitutional court judges will preside over the ruling on whether to annul the controversial vote that saw Malawi President Peter Mutharika re-elected in the May 2019 election, in Lilongwe. - Lazarus Chakwera told AFP in an interview that the annulation of the May 2019 vote vindicated their long held suspicion that elections in the country of 18 million people, had for decades not been free and fair. (Photo by AMOS GUMULIRA / AFP) (Photo by AMOS GUMULIRA/AFP via Getty Images)

Malawi’s President Lazarus Chakwera has stripped his Vice-President Saulos Chilima of all his delegated powers after the latter was named in a $150m (£123m) corruption scandal involving government contracts.

The vice-president has not yet responded to the allegations.

A report by the country’s Anti-Corruption Bureau (ACB) named 53 current and former officials as having received money from British-Malawian businessman Zuneth Sattar between 2017 and 2021, the president said.

This is in relation to 16 contracts that the Malawi Police Service and the Malawi Defence Force awarded to five companies belonging to Mr Sattar.

The officials named in the report include the vice-president and the head of police – who has been sacked.

But Malawi’s law does not allow the president to sack or suspend his vice-president as the latter is an elected official.

“The best I can do for now, which is what I have decided to do, is to withhold from his office any delegated duties while waiting for the bureau to substantiate its allegations against him,” the president said in a national address on Tuesday.