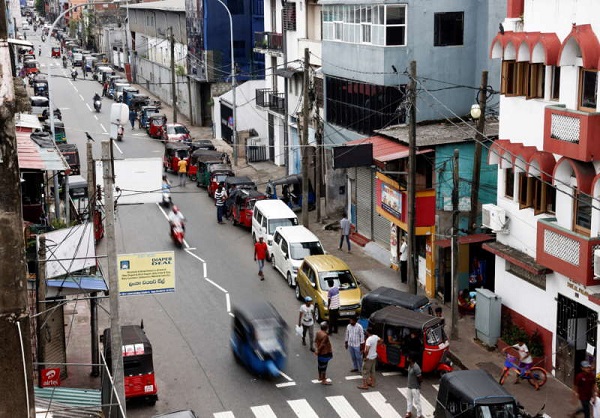 Vehicle owners wait in a queue to buy petrol due to fuel shortage, amid the country's economic crisis, in Colombo, Sri Lanka June 17, 2022. REUTERS/Dinuka Liyanawatte

Sri Lanka’s government has ordered public sector employees to work from home for two weeks due to severe fuel shortages as the island nation grapples with its worst financial turmoil in seven decades.

With existing stocks of fuel projected to run out in a matter of days, Sri Lanka is scrambling to find a foreign exchange to pay for desperately needed petrol and diesel imports. A combination of government mismanagement and the COVID-19 pandemic has pushed the country into its deepest economic crisis since independence from Britain in 1948.

The Public Administration and Home Affairs Ministry announced the work-from-home order on Friday for all but the most essential workers. Todays reports

“Taking into consideration the severe limits on fuel supply, the weak public transport system, and the difficulty in using private vehicles, this circular allows minimal staff to report to work from Monday,” the ministry said.

Of its approximately one million government employees, those providing essential services such as healthcare will continue to report for duty at their offices, the circular said.

The education ministry also said all schools have been asked to remain closed for two weeks from Monday and to ensure online teaching if students and teachers had access to electricity.

Earlier this week, the government also approved a four-day work week for public sector workers to help them cope with a chronic fuel shortage and encourage them to grow food.

Snaking lines of vehicles stretching several kilometres have formed at many gas stations countrywide this week, leaving some people waiting for more than 10 hours for fuel.

The country is also facing record-high inflation and lengthy power blackouts, all of which have contributed to months of protests – sometimes violent – calling on President Gotabaya Rajapaksa to step down.

Sri Lanka is in talks with the International Monetary Fund (IMF) for a bailout package with a delegation expected in Colombo on Monday.

The United Nations has outlined a plan to raise $47m to provide assistance to 1.7 million Sri Lankans worst-hit by the crisis over the next four months.

As many as 5 million Sri Lankans could be directly affected by food shortages in the coming months, Prime Minister Ranil Wickremesinghe’s office said in a statement on Friday.

The World Food Programme (WFP) said it began distributing food vouchers to about 2,000 pregnant women in Colombo’s “underserved” areas as part of “life-saving assistance” on Thursday.

The WFP is trying to raise $60m for a food relief effort between June and December.