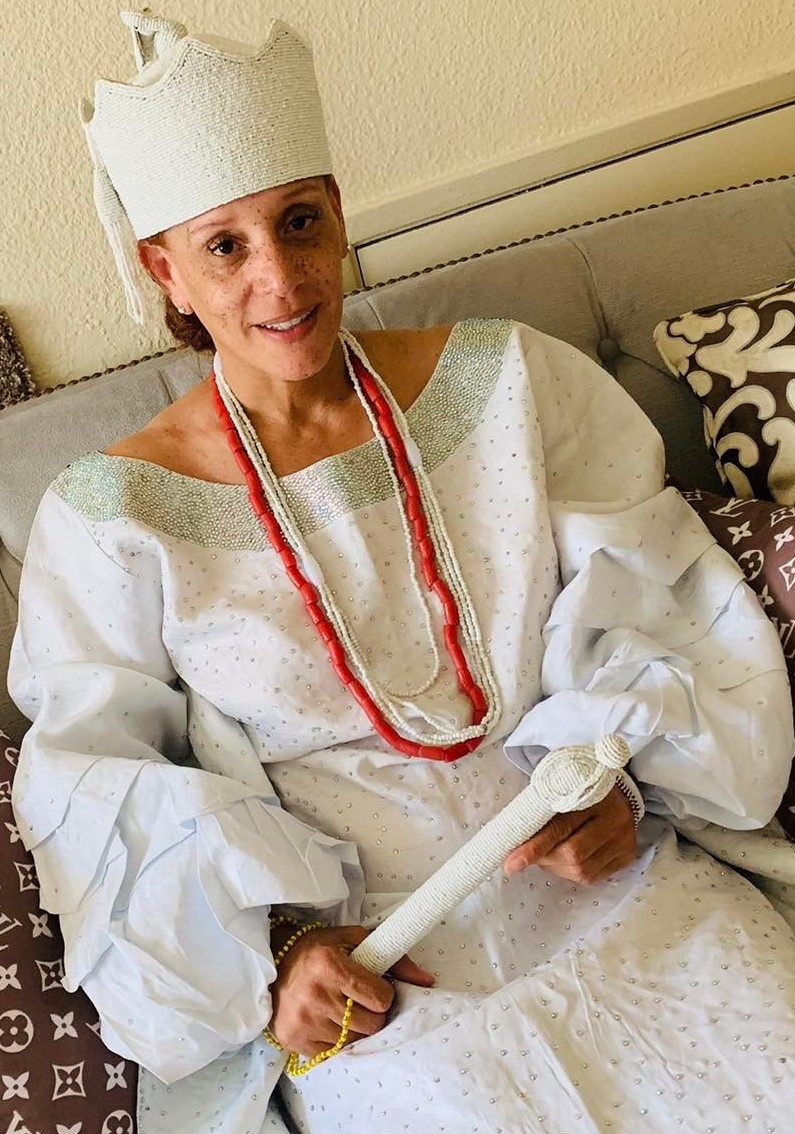 Fabunmi Adefunmi Sands is a scientist 1, licensed phlebotomist, certified orthopedic technician, and Echocardiogram reader who is currently working as an Emergency room technician II, and as a shop steward for SEIU-United Health care workers, a part-time lobbyist who assist with debating on the Capital floor in Sacramento, California, dealing with health care bills and rights for the people of California.

Fabunmi is a part-time Human rights activist, a peace ambassador for the Black race, an African American Historian who hosts traditional and spiritual educational events, and the Yeyeoba of Oyotunji African Village who practice priestly ways that were learned from her parents and global travels on traditional events.

Can you tell us briefly about yourself, your family and educational background?

I am a Dahomean/ Yoruba diaspora who was born in Black Mecca, you would know it as Harlem, New York. I was born and named “Ifabunmi Olubiyi Adesoji Adefunmi’’ by way of my African naming ceremony, and my American name is Fabunmi Olubiyi Adefunmi’ which was on my American government papers.  As the daughter of Oba Adefunmi I and Olori Olubunmi Adesoji, I am a diaspora child of the Oyo and Ile Ife Empire by my diaspora blood line.

I was born to the ruling house of Adefunmi, first Oba of Oyotunji African Village ‘Osejiman Efuntola Adefunmi I, and the first Olubunmi Adesoji the queen of Lukumi and the first Queen of Oyotunji. My parents, who were very strong traditionalist Yoruba priests, were very renowned in the priesthood in North America. I was born to a clan of Obatala priest on my father’s side. My mother’s clans are warrior women / iron women as well as Christian preachers, and Native Indian (Black foot and Edisto) medicine spiritualists.

I was raised in the USA with western colonial ideology all around me; I am a grand descendant to Alexander Hamilton, the first treasure to the United States of America, also the grand descent to Robert Smalls, the first freed slave Senator to South Carolina. I am the grand daughter to Roy King who worked alongside the General Marcus Garve to help the Black star liner and assisting with the birth of Liberia. I was at the birth of the beginning of the nation we all now call Oyotunji African Village. I was raised in the Sango temple in New York until I was age 5, where for many nights my Yeye and baba with other priest held bembe’s and called the ancient Orisas to the earth.

Who influenced you the most in life and why?

My mother was the most influential in my life, she made me to be strong and never scared of anyone or anything, she made me very proud of my blackness when in this country call America frowned on the black people. My mother instilled in me the four elements of courage and I have lived by the rules till this day.

You are the Yeye-Oba of Oyotunji Kingdom, a royal princess and an ambassador of the royal crown; At the most simplistic level, an ambassador acts as a representative which you are one, what are your responsibilities and how have you impacted lives with your position?

Yes! I am the mother of King to Oyotunji African Village, I am the daughter of the first king of Oyotunji, I am the eldest sister to the reigning king of Oyotunji. I am in perpetuity to the Royal Crown, West African culture tradition spirituality of Ancient African religions.

I am also a representative of healing of the mind and body when in crisis, which is ruled with the divinity of the creator’s touch. My responsibilities are to work hard to educate and put forth the truth about our people and to help continue pride and proof of the great royals and rulers of great empires before antiquity, before slavery interrupted our ancestor’s time in the Empires of the humblest of humanity. I helped the spiritual children understand what that force is that compel them to want to return to Momma Africa. That force that they cannot understand, for my people in the diaspora, as well as globally, I supervise, manage and negotiate for the betterment for the kingdom of Oyotunji and the nation of the Yoruba and black race.

Also, part of my responsibility to the king is to report on my findings pertaining to the family of the Adefunmi and the village of Oyotunji, also to know of the crimes against the Diaspora Africans that were scattered across the world and to make the Diaspora in America and the world to know that you have a home in Oyotunji. I educate on the name of the land called Oyo and Ile Ife, the birthplace of our ancestor. For generation we in North America were never allowed to know the names to return home to. I give the names of the ruling Kings so when they return to momma Africa, they can visit the crown that ruled over our ancestors across the ocean back in mommas Africa’s arms long before the diaspora became diaspora. I educate on how to practice our ancestors’ ways opening without religious persecution. My responsibility is to give hope to our oppressed brothers and sister who are being gun-down in cold blood here in the diaspora on how to spiritually protect them and by shielding themselves with the Orisa.

You attended the World Obatala Annual Festival 2022 edition held in Ile-Ife, Osun State, Nigeria under supreme auspices of the His Imperial Majesty, Oba Babatunde Enitan Ogunwusi Adeyeye, Ojaja II, Ooni of Ile-Ife and the leadership of His Divine Grace Oba (Isoro) O.O.O Dada, The Obalesun Obatala Worldwide. What was the inspiration and motivation that drives your spiritualism on the attendance?

Its closeness of defining me, inline that gives birth to my ancestral lineage where I originated from, they made me who ways show me the way back to the creator to better understand the quality of being.

Being a Diaspora African American, my ancestor’s culture is unwavering, I love the ancient customs they still hold to be true.  I love the mystic and the beauty of the beginning of humanities manifestation of traditions that survive the birth, death and rebirth of Momma Africa’s children.

Visitors from different parts of the world such as; USA, Brazil, Trinidad & Tobago, Venezuela, Argentina, Cuba and more were in attendance of the festival. Can you share with us your experience?

An awesome experience!!! I lived in America with hundreds of different ethnicities, but to spend quality time with those many different devotees from around the globe was spiritually uplifting, it made my soul feel more of a connection to being home.

The festival continuously engages in by promoting the Yoruba Cultural agenda towards a veritable socio-economic and political emancipation of our people globally as a yardstick towards global development. How would you use your visit and experience to motivate other Americans who are African descent especially Nigerians-Americans to join you?

I use all my experience to educate and give proof and facts that knowledge is power and always seek the truth, my culture; tradition spirituality has been proven through science, throughout time, our ancestors’ ways is that of the ways of divinity that lives in us all.

This year theme for International Women’s Day, is “Gender equality today for a sustainable tomorrow”. Can you tell us how to achieve a better and more sustainable future for all?

A lot of African nations are fashioning their democracy after the west, yet we exist in some level of neo-colonialism. Well, is there a way to localize democracy that will fit the African context?

Our ancestors left us a blueprint, remember if you look at the Ogbonis, and the Oba council, they already have what we need but the seed of evil scamming, deceitfulness has manifested, and we must remove it from our DNA. We must know how to remove the corruption tree and we must burn its roots.

Researches put forward a new narrative explaining the variations in African ancestry in the Americas and how these variations were shaped by the transatlantic trade, how has you and many others changing the narrative for development?

African Ancestry in North America, the land of the free the home of the brave, those words where never meant for us Chattel Diaspora , American Africans who built this nation. USA Diaspora who still used as target practice for the white man’s fear prophesy preparation for the last stance of the pure white race. I as a decedent of chattel slaves, has study the reason for the debauchery of my people here in North America. Just the fact that I am allowed to read and write, look a white person in their eye when I speak and not be murdered for it is a gift from the great Brave Black Men and women who came before me.

The Trans-Atlantic Slave Trade took my ancestors humanity for generations, along with millions of ancestral lines. The slave trade took my ancestors language for generations upon generation from us and gave us the oppressors tongue. Still to this day we struggle to learn our ancestor’s original tongue we struggle to go back to Africa for we don’t know where to go, that is until Oyotunji African Village. The strength and resilience of my people brought forth survival tactics to live in this land, first they learned to survive by speaking to one another in an invented language called Geechee talk, , the Geechee talk was invented to help talk about things so the slave master could not know what was going on and used to trade with Indigenous of the North America .

Amazing memories are unforgettable; can you share with us the most amazing memory?

My most amazing memory was with my Yeye and Baba, they both were singing and drumming to SANGO  my yeye was singing oriki (Eulogy)  while my baba was drumming and me and my sister Fabayo were dancing, best memory ever.

How many languages can you speak fluently?

I speak 2 languages fluently and several others like Yoruba and French I struggle with it . Though the language was spoken amongst the free blacks and the red skin Indians of this land. As a DESCENDANT I speak Gee Chee fluently like I speak English. In America the chattel slaves lost their culture and their spirituality. As their descendants we fight every day to return to our ancestors’ ways.

What advice would you give the younger ones?

Thank you for sharing with ADM