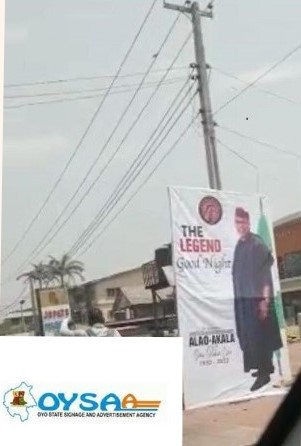 The inventor of the Portrait Pole Post (P3), Fashogbon Abiodun David has frowned at flagrant disregard for the copyright of his firm by Oyo State Advertising Agency (OYSAA), threaten to take a legal action against the DG of OYSAA, Temi Adibi who allegedly masterminded that violation.

Fashogbon, while reacting to newsmen in Ibadan on Friday said some violators whom his investigation revealed was encouraged by OYSAA DG infringed on his copyright with the adverts used for the burial of that late Oyo State Governor, Otunba Adebayo Alao Akala in Ogbomoso metropolis.

The CEO of Outdoor Out of Home (OOH), an advertising firm with a product called P3, an invention of Fizzie Republic said he decided to looked away because of the long relationship he has with the Akala family and especially the person of Olamiju Akala, but want the OYSSA boss sanctioned.

“If Temi Adibi did not desist from misleading the public, he will be sued along with the violators because all the documents that protected our copyright claims over the product that we invented have been long submitted to him and his office (OYSAA). We expected his office to protect the right but the reverse is the case.

“This is not the first time he will be masterminding people to violate our rights, as we are in Federal High Court with 9mobile on a similar case that will come up for hearing in March 2022”.

“We invented this brand of advertising many years ago and we took bold steps to register it with Nigeria Copyright Commission via our legal department. The commission did their investigations and found out it was our idea and we told them how we came about the initiative in written, and our claims was accredited and thereby given the copyright certificate”, Fashogbon noted.