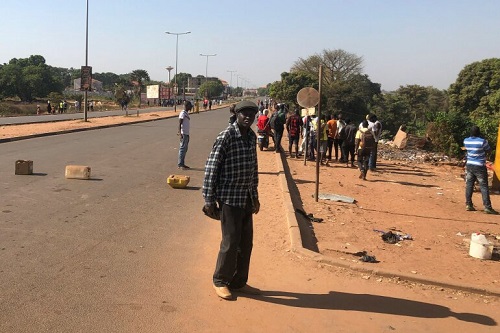 Several shots were heard near the Guinea-Bissau government palace, and the military has set up a security perimeter around the area and is not allowing civilians to pass [Antonio Amaral/EPA]. Al Jazeera

Heavy gunfire has been heard near the presidential palace in Guinea-Bissau and the presence of armed men surrounding the palace was noted in what looks like a coup today, Tuesday the 1st of February. President Umaro Sissoco Embalo and Prime Minister Nuno Gomes Nabiam are believed to have gone to the palace to attend a cabinet meeting.

The state broadcaster reported that the shooting has damaged the government palace and that “invaders” are holding government officials hostage.

The whereabouts of the president and the prime minister remain unknown at this time.

#UN chief Guterres says alarmed with the news of fighting in #GuineaBissau, called for an immediate end and full respect of the country’s democratic institutions.

Meanwhile, the West African regional bloc ECOWAS condemned what it described as an attempted coup in Guinea-Bissau, “ECOWAS is following with great concern the evolution of the situation in Guinea-Bissau…where military gunfire is taking place around the government palace,” the organisation said.

“The President of the African Union Commission, Moussa Faki Mahamat, is following with grave concern the situation in Guinea-Bissau, consisting of an attempted coup against the country’s government,” the AU said in a statement.

“He calls on the military to return to their barracks without delay and to protect the physical safety of President Umaro Sissoco Embalo and members of his government and to immediately free those of them who are in detention,” it said.