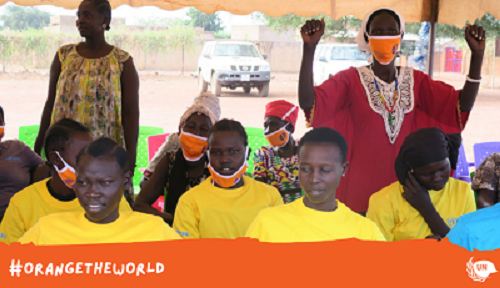 “My mind is in school. I do not want to be married before I finish my education,” said Ayat Garang Kenyang, a school student in Aweil, Northern Bahr El Ghazal.

Ayat was speaking at an event hosted by the United Nations Mission in South Sudan (UNMISS) to mark the annual 16 Days of Activism Against Gender-Based Violence.

We need to transform South Sudanese society into a place where women and children can live freely and happily, enjoying equality

“What I have understood from this event is that violence against women and girls must stop. As young girls, we need to be free from such threats so that we can concentrate on our studies. I also urge boys to respect us and to stand up for us. They should refuse to marry girls who are uneducated or minors,” continued Ayat.

Ayat’s schoolmate, 18-year-old Shama Malek, agrees. “Forcing girls to marry when they are minors means that we are creating a society where 50 per cent of the population – women, and girls – are largely uneducated and therefore cannot contribute to developing our nation. We also suffer from early pregnancies when we are married young. This takes a severe toll on our health,” Shama said eloquently.

With overarching patriarchy in place, young girls often do not have the same rights as boys in South Sudan. This leads to unequal power structures at the community level, and, unfortunately, women and girls are often subjected to different forms of violence and abuse.

“Violence against women and children is a human rights violation,” said the Ataklti Hailu, the Head of the UNMISS Field Office here. “We need to transform South Sudanese society into a place where women and children can live freely and happily, enjoying equality,” he added.

Some 200 community members attended the colorful and meaningful event, which ended with David Wek Wekdit, Acting Minister of Gender, Child and Social Welfare urging women and girls to promptly report any abuse to local law enforcement so that perpetrators can speedily be brought to justice.