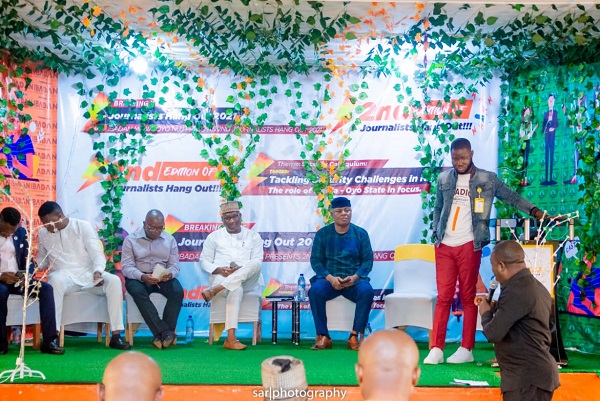 Appalled by the worsening insecurity, violence, and criminalities in the country, concerned Nigerians have implored the Federal Government to as a matter of urgency, address the nation’s security problems.

The concerned Nigerians who were participating in the second edition of Journalists Hang Out organized by the Ibadan Media in collaboration with the Nigeria Union of Journalists, Oyo State Chapter warned that Nigeria is fastly drifting into a state of anarchy.

The participants among whom were the Special Adviser to the Oyo State Governor on Security Matters Rtd CP Fatai Owoseni and Media Executives from NTA Ibadan, Splash FM, Fresh FM, and the Nigerian Tribune noted that the nation’s security apparatus are overwhelmed by insurgency, banditry, kidnapping, ritual killings and other forms of violence and serious crimes ravaging the nation.

The speakers, who noted that there is no workable policy for security maintenance in the country, called for a review of the country’s constitution to allow for community policing and re-energize the security system in Nigeria.

They stressed that security issues should be the concern of all, hence the need for all members of society to work together to tackle the security challenges facing them.

In his remarks, Rtd CP Owoseni charged the media to avoiding sensationalism but rather be factual and objective while reporting crimes and security-related events.

“Tne media should be alive to their duty as the Watchdog of the Society. They should spur on government and security agents to perform their duties effectively for the overall good and general well being of all members of the society”, the retired police chief said.

“We Journalists often tried to get to the roots of matters or balance our stories by seeking the truth from spokesmen of relevant security agents. But several times, these spokesmen made themselves unavailable. Even when they are available, they declined comments or withheld information. When faced with these situations, we are forced to publish what we know. Therefore, for us to come out with a balanced report, we need the cooperation of security agents”, Babalola said.

In his opening speech, the Convener of 2021 Journalists Hang-Out Mr. Olalekan Olanrewaju Ola explained the rationale behind the choice of the theme of its 2021 edition – ‘Tackling Security Challenges in Nigeria: The Role of the Media – Oyo State in focus’.

Mr Ola stated the theme was chosen to allow the media and other stakeholders to proffer lasting solutions to problems of insecurity in Nigeria.

The summit, attended by media practitioners and other professionals, featured award presentations to distinguished personalities who had contributed immensely to the development of Oyo state.

Among those honored was the Deputy Governor of Oyo State, Engr. Rauf Aderemi Olaniyan, the Chairman, Board of Commissioners, Nigerian Communication Commission (NCC), Professor Adeolu Akande.